Please note that the forwarding of IO within PMIx is a subject of current RFC development. Thus, the description on this page should be considered a “draft” at this time and is provided to help stimulate discussion.

The term “tool” widely refers to non-computational programs executed by the user or system administrator on a command line. Tools almost always interact with either the system management stack (SMS), user applications, or both to perform administrative and support functions. For example, a debugger tool might be used to remotely control the processes of a parallel application, monitoring their behavior on a step-by-step basis.

Underlying the operation of many tools is a common need to forward stdin from the tool to targeted processes, and to return stdout/stderr from those processes for display on the user’s console. Historically, each tool developer was responsible for creating their own IO forwarding subsystem. However, with the introduction of PMIx as a standard mechanism for interacting between applications and the SMS, it has become possible to relieve tool developers of this burden.

This design guide is intended to:

Note that the forwarding of IO via PMIx requires that both the host SMS and the tool support PMIx, but does not impose any similar requirements on the application itself. 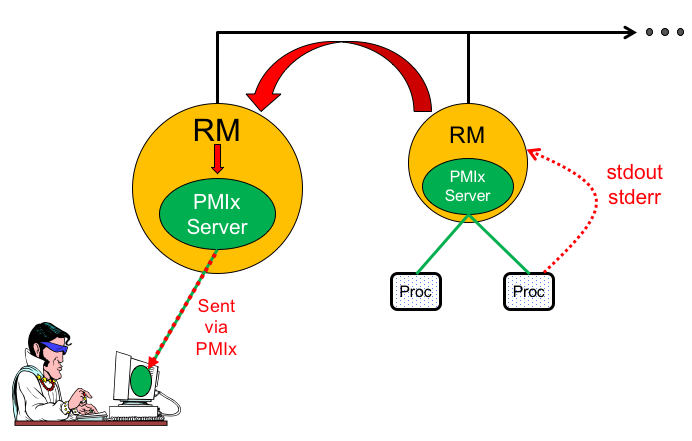 At an appropriate point in its operation (usually during startup), the tool utilizes the PMIx_tool_init function to connect to a PMIx server. The server can be hosted by an SMS daemon, or could be embedded in a library-provided starter program such as mpiexec. In terms of IO forwarding, the operations remain the same either way – for purposes of this discussion, we will assume the server is in an SMS daemon, and that the application processes were directly launched by the SMS (see diagram at right).

Once the tool has connected to the target server, it can request that output from a specified set of processes in a given executing application be forwarded to it. In addition, requests to forward output from processes being spawned by the tool can be included in calls to the PMIx_Spawn API. Two modes are envisioned:

Application processes are the children of the local SMS (typically, the local RM daemon) and not directly related to the PMIx server itself. Thus, it is the responsibility of the local SMS to collect the child’s output – usually done by capturing the relevant file descriptors at fork/exec of the child process – and the PMIx server on the remote nodes is not involved in this process. Once captured, the host SMS is responsible for returning the output to the SMS daemon serving the tool. This typically will be the daemon co-located with the tool, but this isn’t required.

Once the output reaches the serving SMS daemon, the daemon passes the output to its embedded PMIx server via the PMIx_IOF_push function whose parameter list includes the identifier of the source process and the IOF channel of the provided data. The PMIx server will transfer the data to the tool’s client library, which will in turn output it to the screen.

When registering to receive output, the tool can specify several formatting options to be used on the resulting output stream. These include:

The PMIx client in the tool will format the output stream. Note that output from multiple processes will often be interleaved due to variations in arrival time. 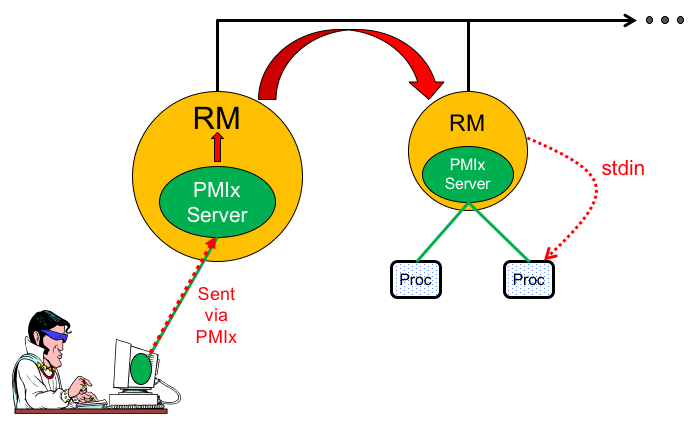 The tool is not necessarily a child of the RM as it may have been started directly from the command line. Thus, provision must be made for the tool to collect its stdin and pass it to the host RM (via the PMIx server) for forwarding. Two methods of support for forwarding of stdin are defined:

Note that it is the responsibility of the resource manager to forward data to the host where the target proc(s) are executing, and for the host daemon on that node to deliver the data to the stdin of target proc(s) via the typical pipe. Specifically, the PMIx server on the remote node is not involved in this process. Systems that do not support forwarding of stdin will return PMIX_ERR_NOT_SUPPORTED in response to a forwarding request.

Advice to implementors: it is recognized that scalable forwarding of stdin represents a significant challenge. A high quality implementation will at least handle a “send-to-1” model whereby stdin is forwarded to a single identified process, and an additional “send-to-all” model where stdin is forwarded to all processes in the application. Other models (e.g., forwarding stdin to an arbitrary subset of processes) are left to the discretion of the implementor.

Advice to users: stdin buffering by the RM and/or PMIx library can be problematic. If the targeted recipient is slow reading data (or decides never to read data), then the data must be buffered in some intermediate daemon or the local PMIx server itself. Thus, piping a large amount of data into stdin can result in a very large memory footprint in the system management stack. This is further exacerbated when targeting multiple recipients as the buffering problem, and hence the resulting memory footprint, is compounded. Best practices, therefore, typically focus on reading of input files by application processes as opposed to forwarding of stdin.